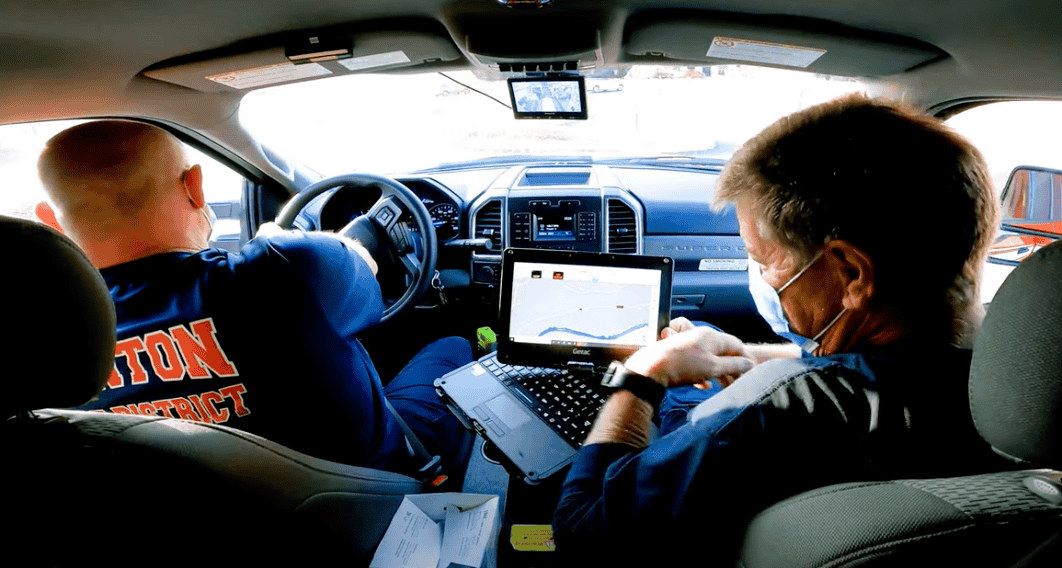 A humid July night in central Missouri, late, nearly 3 a.m. Swirling mists of heavy water vapor mimic London’s famed fogs. Suddenly a car recklessly flings itself around a corner, careening onto the empty street ahead at a crazy-stupid rate of speed. With the right kind of eyes and ears it is possible to envision an ancient Caddie or Packard roadster plowing through the ground-level murk, its no-nonsense, solid-black exterior, revolving red light prominently mounted dead-center on the  roof, fracturing the night with an old-fashioned windup siren wailing for miles.

Impossible to believe, but somehow just enough more speed has suddenly been coaxed out of that 4500-pound sedan because it roars around the next corner with both right-side wheels nearly leaving the ground. Then you spot it, flames and smoke bursting through the roof of a building down the street and just as quickly the image wavers, shifts, and re-solidifies. You realize you haven’t somehow stumbled into a 70-year-long time tunnel between today and another era that paved the way for TV classics, such as “Highway Patrol,” and “Dragnet,” and, yes, even “Racket Squad.”

Gone now are the mirage-like images of classic Caddies and Packards, gone and replaced by shiny new Ford Crown Vic “chiefs’ cars,” equipped with today’s most eye-blistering blue-and-clear strobe lights on their roofs and blaring electronic “wa-wa” howlers that can be heard for a mile and a half in all directions. Side-door decals identify the vehicles as part of the 911 Central County Emergency Department, which provides fire, ambulance and rescue service to approximately 30 communities southwest of St. Louis.

But the sleek new rides, a fleet of chiefs’ cars dedicated to beating out all comers including other first responders to serious emergency/accident scenes, boasts more state-of-the-art electronics than mere strobe lights and super sirens. They are also equipped with one, or in some cases two, Getach V110 fully ruggedized, dock-mounted convertible tablets hitched to a Wi-Fi router enabling the chiefs’ cars, and roughly 220 ambulance and fire trucks similarly equipped to flawlessly communicate with central dispatching in Ellisville, Indiana. Deployed is an array of WiFi, radio and telecommunications hardware, software and some of the most sophisticated algorithms in the business for automatically determining the exact combination of locations and bandwidths which are the most efficient routing at any given point on the system.

“Everybody loves the Getac’s,” enthuses Matt Thuston, 911-CCE’s IT guru who, among other things, spent a good part of 2019 personally removing old hardware from all 300-some mobile units and replacing them with the V110 convertible tablets and updated auxiliary components.  “Our previous makers’ units were classic rugged laptops. They were big and bulky, an impediment to visibility in the vehicles’ cabs and harder to dock, undock, and move out of the way than the Getac’s.”

Thuston noted that in addition to being compact, lightweight (1.4-inch thick, less than 4.75 pounds), and Mil-Spec certified, the rugged convertible tablet/laptops feature an 8th Gen Intel® Core™ i7 vPro™ V110 (i5 Core CPU optional) that delivers more speed, power, and performance across the board. Especially, Thuston said, in detailed graphics applications where Intel’s new UHD Graphics 620 subsystem provides an unparalleled level of 3D responsiveness and video frame rates for the map-and-motion analysis tools crucial to locating hotspots and supplying rescue crews in the fastest and most efficient manner.

In addition to providing substantially more raw computing power than the legacy laptops they replaced, the V110 convertibles are considerably more flexible in both operation and deployment. Those older models had totally rigid keyboards, Thuston noted. Once you opened the laptop clamshell (cover) you were stuck with the keyboard hard-mounted below the screen. There was nothing equivalent to the V110’s built-in tablet mode.

“The Captains assigned to those cars with our competitors’ hardware really hated that system,” he recalled. “Being unable to fold the keyboard back against the screen meant that part of the display was invariably blocking an area that they needed to be able to see through the windshield. Now they can ‘hide’ the keyboard and use the tablet mode to transmit and receive without having the unit intruding on their ‘live’ center and side windshield view.”

According to Thuston, Getac account executive Perry Wiersma, and reseller John Ayers, the V110’s fold-back-and-latch screen is a favorite feature of ambulance crews as well as fire chiefs.

“We did initial installs with all the units deployed in the front of the vehicles, because that’s obviously where you need to be able to access the routing information and any notes that are added to the calls,” Wiersma says. “It’s also where you need to see the maps to locate backup units and perform many other crucial tasks. But right now a fair number of the departments have already contacted us about mounting an additional V110 with medical sensors in the back of their ambulances so they can exchange vital signs and triage instructions in real time.”

Of course, no matter what is being discussed money always matters. “Some of our crews have already discovered ways to use a rear-mounted V110 to increase cost-effectiveness by minimizing the amount of handwritten form-filling and red-taping inherent in all emergency vehicle call-outs,” Thuston said. “For example, one of the departments is now putting all its patient-reporting data into a V110 rear-mounted in an ambulance. They couldn’t really do that with the old equipment, because those computers were so hefty and bulky that you frequently couldn’t even get a digital signature from the patient by putting the laptop in their lap.

“With the V110 all the medical data we collect before and right after the ambulance rolls is entered into the computer while it’s in tablet mode with the screen folded back. They can hand it to the patient or the patient’s custodian and it’s just like passing along a notebook for a signature.”

Thuston noted the crews were particularly impressed to discover a new computer system with benefits that extend beyond giving first-response drivers more efficient dispatching and routing information.  “Once they realized they could use the V110 for starting and following an electronic medical-reporting trail and even to begin the insurance company billing process, the number of employees buying into the program soared.“

Additionally, Thuston says, the extraordinary versatility of the V110 system particularly benefits first-response crews like 911 Central County Emergency because the great majority of the crews are certified as both firefighters and EMTs. Thus they regularly rotate positions to keep their skills fresh in both areas. Having a system pre-designed to simplify data collection and distribution is a virtual necessity for keeping up to date.

“The point is we’re not a traditional public-safety department,” Thuston notes, going on to explain why each mobile unit carries an OMG Wi-Fi router in addition to cellular telecommunications and analog radio components. “We connect 30-some separate jurisdictions covering about 80% of St. Louis County outside the city limits. That comes out to about 326 vehicles equipped with one or more forms of lifesaving apparatus, plus the chiefs’ cars, plus 82 fire stations, plus numerous fire alarms installed in key building locations. That’s a lot of ‘pluses’ and a fair number of different connectivity options with the one constant being the Getac V110 units in each vehicle.”

Central County uses OMG (formerly Sierra Wireless) routers and runs their dispatching system off the routers using a customized Central Square Technology mobile client that routes the vehicles to their calls, then files and tracks all the notes and time slips related to that call.

The system sounds simple, not terribly sophisticated at all, until all the potential variables are calculated. Here’s a basic scenario. Someone contacts 911 dispatch with a request for a unit. A dispatcher enters the information into the V110 and the incident site is precisely located by the V110’s GPS module. But, as often happens, the fire truck closest by distance is not closest by speed.

An example Thuston likes to use involves downed electric wires.

“The dispatching program Central Square devised for us is really nothing at all like Google or Apple maps. The Google or Apple map applications will calculate the routes and try to find the fastest one between the two points. But the user needs to take into consideration such things as time of day, traffic density, and a myriad of other factors,” he says.

“Our system goes way beyond that. When Moto, which is the company that maps central Missouri road conditions, closes a section of road it will turn our speed limit to 0 and will only reopen it when Moto says it’s ready to be reopened. It’s not like Google Earth or Apple maps or some other mapping programs that reopen the screen after a certain amount of time, whether it’s days or weeks or hours. Our roads will stay closed until we get a positive notification that our program can actually route units where they need to go while simultaneously changing the speed limits within our maps.”

According to Thuston, the same circumstances apply when some concrete replacement is being done in a neighborhood. The section of road down to the one lane is instantly shown on the computer-generated map as having a one mile an hour speed limit instead of the nominal 20mph.

A similar built-in failsafe applies almost instantaneous map upgrades to provide safe vehicle routing during brownouts or other situations that are not normally thought of as massively critical. For example, if the first truck to respond to a report discovers that Amram (a major natural gas and electricity provider) has a downed wire, the Getac operator on the fire truck just types GQ, adds in the pole number, and notes that they have already marked the pole with yellow tape.

This report is immediately transferred to Amram, which looks for specific words in the area’s computer dispatch system that might indicate other issues of the same nature. At this point the dispatchers send the call but the attached notes don’t go over the air unless and until firefighters, medics, and the computers are on the same page and reporting that it’s safe to resume normal operations.

And, as far Matt Thuston is concerned, the definition of “normal operations” revolves around his state-of-the-art Getac V110 convertible tablets. “It’s no secret around our procurement department that Getac offered a quite favorable deal on the new systems, but at the end of the day it really didn’t matter too much,” he admits. “No matter the size of the budget or whether I could afford to buy the most expensive ruggedized systems on the market, I would have stuck with what we got. The Getac’s have exceeded everything we expected from them in every performance, reliability, flexibility, and economic category.”