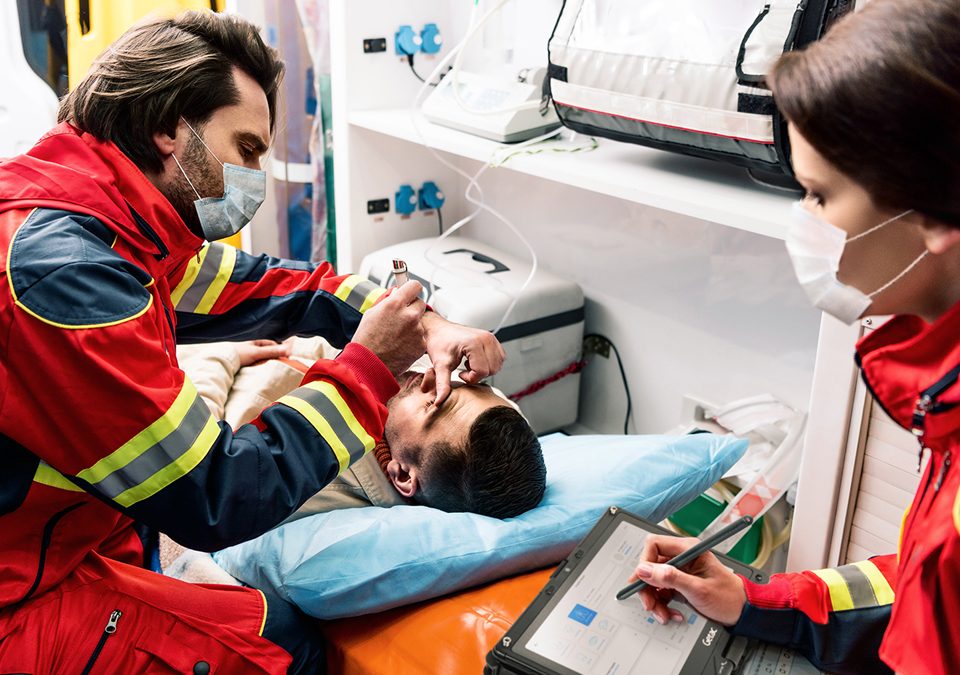 A brutally hot August afternoon at a pre-Covid-19* Monroe County Fair.  A walkie-talkie in the first aid tent crackles to life. A security guard at the far end of the fairground reports a male visitor down after stumbling off the roller coaster and cracking his head on the car ahead of him as he fell.

Driving to the scene via paths and through midways thronged with strolling adults, dancing children, vendor carts, arm-locked teens, and the occasional cow, horse, or pig is impossible. Trying to run, jog, or stride through the throng is impossibly slow. An EMT with a Monroe Ambulance logo on his shirt mounts a bicycle outside the tent and rapidly peddles off, deftly dodging all the slow-moving pedestrian traffic in his way with a consummate skill revealing much prior experience.

Four minutes later his bike is parked and he is kneeling, shrugging off his backpack, next to a man lying completely still on the ground. He checks the victim’s vitals – low but steady – and pulls a foam cervical collar out of the backpack. The collar applied, a look under the victim’s eyelids showing definite signs of concussion, possibly coma, he phones the Monroe Ambulance call center, details the issues, and requests an ambulance.

With his patient stabilized, he reaches into his backpack again, grabs his Getac V110 and begins working with it, almost simultaneously with the dispatcher in the call center. By using the CAD application on the V110s in each of the company’s 30 ambulances, they will be able to find and dispatch the ambulance closest to the fairgrounds.

With the GPS on his V110 already guiding the responding ambulance directly to the accident scene by pinpointing the nearest fairground entry point, the EMT opens emsCharts ®  by ZOLL ®, a mobile-first solution for streamlining the process of initiating and maintaining medical records for patients on-site or in transit, and begins charting.

Initial entries to be keyboarded into the V110 and wirelessly shared with the approaching ambulance and the call center in real time include, where available, identification, insurance information, medical alerts from wallet cards or bracelets, and, of course, basic vital statistics and observations.

The sun, despite resting in the three o’clock position, continues to beat down on the fairgrounds as if it were still high noon, but Getac’s proprietary 11.3” LumiBond® 2.0 widescreen display is more than equal to the task of providing perfectly visible, high-contrast text and graphics despite being awash in brilliant rays that would render most competitors’ screens many shades of dim, illegible gray.

Once the patient has been transferred to the ambulance, that chart will be expanded and updated continually until the ambulance arrives at the appropriate core facility. Depending on the severity of the injury and whether consulting a specialist (in this case a neurosurgeon specializing in head trauma) is indicated, it could be a long ride.

Monroe Ambulance, a private company which fields calls through its own dispatch center, Monroe County Emergency Communication Department (911), Orleans County 911, and Wyoming County 911.  In addition to emergency response, Monroe has agreements with area hospitals to provide discharge service as well as interfacility transfers for higher-level patient. All of this equates to a 1200+ square mile service area that ranges from New York state’s second – and third-largest cities – Rochester and Buffalo – to endless country backroads in the southern tier of New York.

“Simply put, our service area is big.”, Monroe IT Manager John Cummings says.  Monroe Ambulance has Operating Certificates for Monroe County and Eastern Orleans County and are contracted for the entire county of Wyoming. Which includes a large volume of transfer work between Wyoming County and Buffalo – a busy operation.  Prior to COVID, we saw an average of 90 trips a day with spikes into the low 110’s on busy days, extrapolated, this equates to an annual call volume of over 30,000 transports. Much of the area we service in the southern tier is very rural, lacking ready access to hospitals or urgent-care centers.  With that in mind, many of our transports are long-distance and why the reliability of our fleet of V110s critical.”

“Using the technologies we have in the ambulance we can monitor and chart almost anything … 12-lead EKG, blood-oxygen saturation level, respiration rate, all the usual vital signs, there’s all kinds of different testing and interventions we are able do while the transport is in progress. Those data stacks are collected for the receiving agency, so by the time the patient arrives they have a comprehensive package from where to initiate their care plan.”

“With our territory being what it is, we leverage all the Getac’s connectivity options on a regular basis, Cummings notes. We utilize Getac’s dedicated GPS census data to position our fleet and that’s been terrific.  The units’ signals stay clear of each other and we’ve never gotten any bounce-back.”

“We also have WiFi access points on each ambulance, but that doesn’t always mean anything out in the boonies, so we rely a lot on the built-in LTE circuitry which has been phenomenal. Just for fun, I tested the Getac against a high-end, top-three-manufacturer’s box one time and there were places where I’d pick up signals on my Getac a hundred yards further out from a cell site. A good clean signal, while the other unit was still searching.”

Adding just a bit of extra emphasis to that “phenomenal,” Monroe Ambulance uses its V110s without any external antennas.

“The Getacs are just … just so well-built and designed, Cummings explains, the antennas are integrated right into the edges of the monitor and work flawlessly. We haven’t had any issues whatsoever. Obviously, we get intermittent connectivity issues with our carrier every once and again, but still it’s been very, very smooth. I can’t tell you how smooth it’s been.”

One thing that has gone far less than smoothly for Monroe was the company’s plan to upgrade their current V110 inventory, a mixture of several previous models, with new units in late 2020.

“In practice, our techs were using the touchscreen far more than the keyboard, so it just made sense for us to go with the fully convertible model, Cummings says. I also liked the increase in processing power, the virtually instantaneous boot-up time, and the improved 4G LTE technology.”

“So when Covid-19 derailed our plans for a while, it was disappointing but not tragic because all our current V110s are working fine. In fact, they’re operating so well we’re going to give the fleet a second life as training machines once we replace them in the trucks. We’ll bring them in and use them to train our own EMTs and ambulance attendants, as well as first responders from other agencies who are transitioning from another brand of computer or need to prepare for recertification exams, et cetera.”

How, you have to wonder, could Covid-19 “derail” Monroe’s plans to refresh their V110 fleet? An ambulance service is not a tavern, restaurant, or card room subject to be shuttered by the authorities for the duration of the outbreak. There are probably no more than ten or twelve retail businesses that truly qualify as “essential services” with the country in the grip of a massive and highly contagious pandemic. And near the top of the group should be ambulance services, logic dictates.

“In normal, I should say ‘pre-Covid’ times, we were running 90 transports a day on top of handling a substantial number of non-transport calls, Cummings recalls. BANG! COVID hits – and call volume decreases over 40% and not just for Monroe, this impact was felt by EMS providers across New York State.”

According to Cummings, “People stayed at home, they worked from home, traffic (particularly rush-hour traffic) was no more.  It seems crass, but motor vehicle accidents are part of the business and provides income that translates to payroll.  New York, you may have heard (wink), has a strict governor.  At his command, bars and restaurants were either shut down or otherwise restricted, so people drink at home, translation – fewer drunk-driving accidents, which is fantastic, but another factor.”

“Elective surgeries came to an abrupt halt which resulted in a drastic reduction in discharge volume, perhaps the most significant impact to the business.  Then the social, or human element – fear.  Evidenced by a drastic increase of DOA’s and conversations with family of critical patients, despite clear signs of serious health problems, people began to ignore symptoms and just stay home out of fear of contracting the virus in the hospitals.  This extended to accidental injuries that also went untreated.”

“So what did we do? We kept our employees employed, everything else went to the back burner. Hopefully, in 2021 we’ll have a handle on Covid, and we will move forward.”

“Right here I’d like to stop and say something about Getac and why I’m so comfortable with my relationship with them,” says Cummings. “We’re a small customer – 30 units every three years or so. We know we’re small and they know we’re small, but they treat us the way some other rugged-computer makers only treat volume buyers whose ‘refresher’ orders are in the thousands rather than the tens.”

“When we were hit by the Covid bus, they didn’t try to capitalize on a sales opportunity and kick us while we were down, quite the contrary; they instead offered warranty extensions for our existing units that had recently fallen out of warranty coverage. As icing on the proverbial cake, they sent us upgraded components parts that would retrofit on our existing units as well as miscellaneous wear and tear items that kept the fleet at 100% operation. Their actions and generosity were critical to our getting through a very tough time.”

At one point Getac even sent Monroe instructions on the best way to sanitize the units between runs. Instructions that raised Cummings’ sky-high respect for Getac’s ruggedability just a wee bit higher.

“They told us to go ahead and use the most caustic form of Caviwipes directly on all the surfaces of the computer. These are things that will take the fingerprints off your fingers if you’re not wearing hazmat-level gloves. So we put on the gloves, wiped down a unit, and it just worked. Nothing melted, nothing got sticky, even the legends on the keys refused to fade, and those were keys that had already been hammered on daily for three or four years!”

In addition to not using external antennas, Monroe doesn’t dock any of its V110s, preferring instead to use the units’ two hot-swappable batteries as a continuous power supply.

“We don’t use docks because they make transferring the computers between units fractionally slower, and in our business, fractions are important,” Cummings says. Sometimes the transfers can even be vicious, such as a unit being grabbed off a car seat and tossed across a parking lot to a waiting Comm Center worker who misses the catch.”

“It comes down to this, nobody wants to beat up on these machines. The crews understand they cost a fair amount of money and that successful operation of our business depends on them. So EMT’s take care of them as best as is reasonable;the fact is, when lives are at stake, the patient comes first!”

“And another fact is that in three years of very hard, sometimes brutal, everyday use, we’ve never experienced a critical failure with any of the Getacs.  Not even when an EMT, grieving over losing a patient, slammed it through the front windshield of the ambulance. The safety glass shattered and came tumbling down, the EMT got some decent cuts on his hands and arms. But the V110 didn’t even hiccup or toss up a notification.”