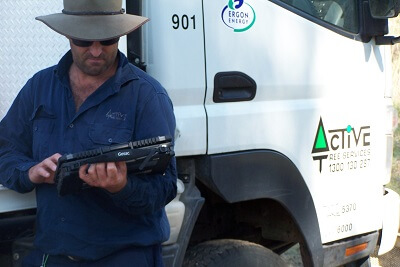 “In South Australia, where we’ve replaced a lot of older equipment with the Getacs, we’ve been told that if we were to take their laptops away they wouldn’t be able to do their jobs. They’ve come to rely on the mobile system. People who are not very IT-literate are picking the laptops up and using them because it makes their job easier. I’d estimate that the system gives us productivity gains in the region of 30 per cent.”
~ Justin Sheppherd, Chief Information Officer, Active Tree Services.

Vegetation may not be the first thing you think of when planning a city’s infrastructure but for every road, railway line or power pole, there are nearby trees and bushes that need to be kept in check. Excessive growth in the wrong place can cause damage to buildings. Roots need to be kept clear of water and sewage pipes. No matter how difficult the location, branches need to be trimmed to avoid intrusion on power lines. Understanding how to manage such vegetation is a specialised job, one that requires expertise, project management skills, high tech equipment, and a physically able workforce.

This is the world of Active Tree Services (ATS), Australia’s largest vegetation management company. For more than 30 years ATS has been working with government bodies, utilities and businesses, helping to manage the balance of infrastructure and nature. The company employs more than 450 staff and maintains a substantial fleet of specialist equipment. 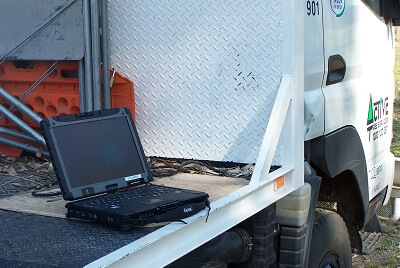 Six years ago, in an effort to obtain more accurate site information for staff and clients, ATS management decided to improve the company’s field data capture. At the time ATS inspectors relied on manual methods to log site information and to prepare briefs for maintenance crews. While the process worked it limited the quantity and quality of information that could be passed on.

To solve the problem the ATS’ IT team developed a mobile data collection solution that would enable inspectors to record a greater variety of site information including asset conditions, the state of vegetation, maintenance instructions and site images. ATS Chief Information Officer, Justin Sheppherd explains, “It was a way of digitally collecting information about vegetation encroachments so that it became more immediate.”

The system was trialled in Western Australian where inspectors were provided with personal digital assistants (PDAs). It was an immediate success but the trial highlighted some important considerations. The conditions that inspectors worked in were often harsh. The PDAs were required to operate in environments that ranged from city parks to dusty remote communities where temperatures soared. Standard computer equipment was not up to the task and in future, it was decided that users should be equipped with rugged devices designed to deal with extreme environments.

Next, mobile data collection was introduced to staff in South Australia. More lessons were learned and the system was again tweaked before being rolled out in Queensland. With each new roll out the system evolved. Touch screens were introduced, software was streamlined and a GIS software package was incorporated bringing valuable spatial data into the mix. Mobility became an accepted part of the organisation’s operations.

A question of hardware

Twelve months ago a number of the company’s oldest mobile devices were due for replacement. Sheppherd turned to Tough Corp, a specialist in rugged mobile technologies and was introduced to the Getac range of convertible laptop computers. Designed for extreme environments and to withstand physical abuse, the Intel i7 powered laptops had the grunt that Sheppherd was after for his graphic-intensive applications. “We tested other devices that struggled with the GIS applications. The software requires quite a profound hardware platform,” he acknowledges.

The Getac V200 also offered versatility – converting to tablet computers with a simple twist of the display.

To confirm whether the Getac V200 rugged computers were fit for purpose, Sheppherd accepted the offer of an evaluation unit. He sent the Getac V200 out with a road crew and reports, “They loved it. It was very easy to use and it had a very bright, readable screen which was crucial for making it easy to read in sunlight.”

Sheppherd also liked the end-to-end service proposed by Tough Corp. “They could supply mounting arms, docks and antennas. These are pretty standard for this kind of gear but their offering focused on ruggedisation. Things are going to get broken in this environment so everything we choose has to be safe to be fitted to a vehicle and as resilient as possible.” Sheppherd notes.

A standard five year warranty for each laptop and Tough Corp’s offer to provide a “hot swap” service by holding spare stock that could immediately be substituted for any damaged or broken units created a compelling business and technical case. By the end of the evaluation, the Getac V200 convertible laptops were adopted as ATS’ standard mobile devices.

Over the last 12 months, ATS has deployed roughly 60 Getac V200 laptops. No longer purely a tool for inspectors, they are also provided to field crews so that as they roll into a site, they can see exactly what is required.

Inspectors note instructions for crews and as each job is completed, the crews use their Getac V200 fully rugged convertible computer to record the work they have done. A 3G connection uploads the data to ATS’ private cloud. If no connection is available the software continues to store data to the cache, synchronising with the cloud once connectivity is returned.

“In South Australia, where we’ve replaced a lot of older equipment with the Getacs, we’ve been told that if we were to take their laptops away they wouldn’t be able to do their jobs. They’ve come to rely on the mobile system. People who are not very IT-literate are picking the laptops up and using them because it makes their job easier. I’d estimate that the system gives us productivity gains in the region of 30 per cent,” Sheppherd says.

The insistence on Getac V200 rugged computers has paid off. Despite the conditions on trucks and in the field, Sheppherd says, “We’ve had minor faults but a Getac computer failing in the field? It just hasn’t happened.”

The aim of better client asset information and reporting is also being achieved. “We’re discovering assets such as power poles that energy company clients didn’t realise existed. It’s creating a lot of transparency in how we service a contract. The level of detail we can provide is much better. Clients can visualise the problems on the network and understand where sites need to be visited regularly to be maintained. There’s so much more information coming back,” Sheppherd concludes.

The Getac 12" convertible notebook continues in service at Berliner Wasserbetriebe