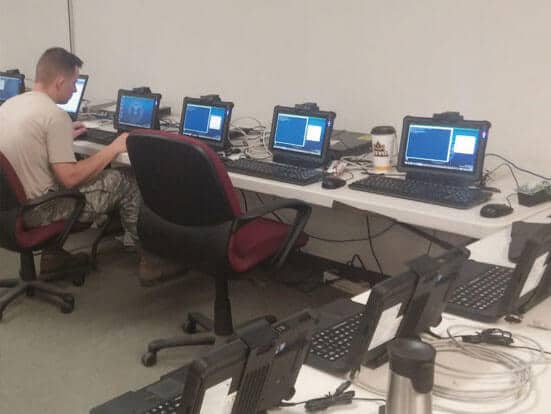 The United States Air Force requires careful handling, storing and transporting of munitions. USAF Master Sergeant Zeshan Meer worked with Getac to customise the F110 to their required specs. Today, the Getac F110 is the standard mobile device for munitions management in the Air Force.

Explosives and electromagnetic radiation don’t mix. That’s the way it’s been in the Air Force since the advent of the radio. If you had to do research anywhere explosives were maintained or stored, you had to look it up the old-fashioned way; that is, scoure through reams of paper or leave the worksite and return to an office to use a PC.

“Yes, the Air Force has computers, but acceptance of mobile computing devices has been slow,” says USAF MSgt Zeshan Meer. Technicians and officers have access to a laptop, a mobile handheld terminal, and a desktop PC. Each is a single-use device with limited functionality. “Step outside the building and 90% percent of the time you’d lose network connection and the ability to connect to any online resource,” says MSgt Meer.

The challenge facing MSgt Meer and the USAF was primarily around electromagnetic radiation. A device transmitting with excessive signals could cause an inadvertent explosion – an unthinkable disaster that the Air Force decided to solve by simply banning all unapproved electronic/transmitting devices from munitions storage areas. 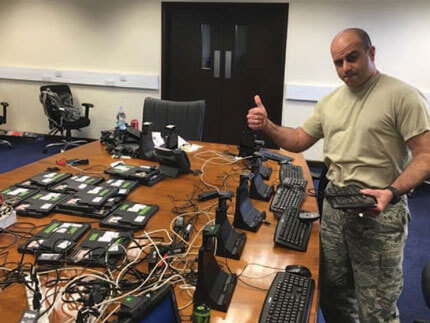 In 2014, MSgt Meer and his boss, CMSgt Hendershot; USAF Munitions Career Field Manager, collaborated and MSgt Meer was charged with figuring out a way to upgrade and sustain the existing, aging IT devices and at the same time, develop a path to the future with little restraint except to consolidate and update the munitions IT capabilities. The goal was to allow the device to connect to network resources anywhere technicians could roam.

Naturally, the device needed to be Air Force network compliant, have an integrated barcode reader (important for managing munitions inventory), and have integrated support for the Air Force’s common access card reader. It had to support the full complement of USAF software to maintain hundreds of manuals and spec sheets, and it needed on demand wireless access and wired LAN to receive updates. Additionally, the device had to meet the Air Force’s strict “HERO ZERO” specification. And, of course, it also had to meet the standards for rugged devices used by the military – MIL-STD 810G – essential for crews using the device in places like wintry North Dakota. “When we tried to use our old laptops out there,” says MSgt Meer “the LCDs would freeze in 15 minutes and battery life was atrocious.”

After much analysis, Getac was willing to partner in this “impossible” task, and MSgt Meer got to work pulling together hardware and software to bring his dream machine to life.

Today, the custom Getac F110, dubbed the Munitions Integrated Tablet (MIT) internally, “can do literally everything,” says MSgt Meer. “With the CAC reader it’s just like I’m sitting at my desk whether I’m in my backyard, on the interstate, or on the flight line,” he says. “And with the barcode scanner and printer, we can process movements of munitions in real time.”

In 2015 the MIT project was sponsored by HQ/ USAF as an Airman Powered by Innovation Initiative and is designated “The” single IT solution for USAF Munitions community. MSgt Meer and his team, MSgt Chris Cummins and MSgt Ron Levi, spent 18 months rolling out MIT to bases around the world. To date, this team of three has installed 1,600 MITs across 66 bases worldwide. 1,800 will be deployed by the end of 2018, plus another 750 in use by the National Guard and the Air Force Reserves. “We’re doing something that no one, including us, thought possible,” says MSgt Meer. His persistence and vision even brought a rare public commendation from Lt. General John Cooper in 2016.

MSgt Meer is humble about it all and gives credit to CMSgt Hendershot for breaking down barriers and to his team for doing the hardest work. “The payoff is knowing we fixed this, not a contractor, not a vendor, Ammo troops, we did it,” he said. “If you find a strong enough purpose, commit, and put in the work, you can affect change.”