Everything is Great in the Kärntner Forest – with Getac’s PS535F

The National Forest Service relies on Getac handhelds
“Because of climate change our mountain forest needs special care. Using Getac’s mobile devices has reduced our administration overhead as well as enabling us to spend more time in the field, and more efficiently document the condition of the forest. All of us – administrators, foresters, landowners – and finally the forest itself – have benefited enormously. We completely embrace the PS535F because it has allowed our rangers to spend more time in the forest and less time at their desks.”
~ Dipl.-Ing. Clemens Zuba, Kärntner State Forestry Agency
Download pdf

The digitized forest
Forestry administrators have been benefiting from the development of GIS since the 1980s. For more than 100 years, before the development of GIS, the forestry service relied on simple tables and cards to monitor data. Therefore, the capture and transference of this data in a GIS was an enormous step forward. “Today, GIS in forestry is no longer just in the hands of a few specialists. It has carved out its place in the daily business of forestry and forest administration. Whether mapping unauthorized clearing, the gathering of bark beetle infestation, forest management funding, or the simple assigning of forest land to respective owners: GIS and GPS have become nearly indispensable tools.”

It is particularly important to gather data (position and area) from the forest that is 100 percent reliable. “Especially in Kärntner where 70 percent of the land is divided into relatively small plots belonging to various owners. Without accurate mapping, it would be impossible to define boundaries of ownership in Kärntner.” says Dipl.-Ing Clemens Zuba of the Kärntner State Forestry Agency.

Too much administration – a detriment to the forest?
Despite, or perhaps because of, technological advances, the tasks of foresters have shifted in recent years away from being in the forest. Foresters now spend much of their time sitting at desks on computers. Many forestry workers regret this trend and view it as having a negative impact on job satisfaction. Furthermore, this can be dangerous in terms of the well-being of the forest. Pest infestations and other forest threats can usually only be recognized, early enough to take action, by frequent presence in the forest. A striking example is the dangerous bark beetle infestation that seems to be growing extraordinarily large because of climate change. The earlier that forestry officials can detect this pest, the greater the chances that damage can be prevented.

“We completely embrace technological equipment when it allows our rangers to spend more time in the forest and less time at their desks,” Zuba stressed. 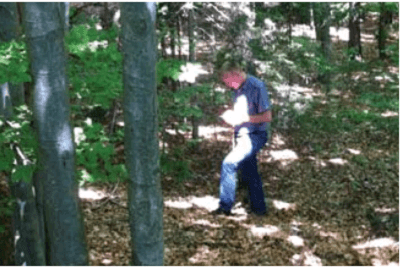 “We have tested all commercially available devices”
Since laptops are too big and heavy to be conveniently carried deep into the forest, it was decided by the Kärntner forest authorities to find a mobile device for rangers that would meet all the requirements described above. Kärntner forest authorities also decided to ask an environmental data company to help them find the best option. A proven leader in applied research and consultancy on environmental issues, their recommendations and professional advice proved to be extremely helpful. After extensive testing and careful consideration of all available options, it was clear that Getac hardware was the best. This opinion was supported by the forestry department as well as the water management office, who had themselves done extensive testing and put the Getac hardware “through its paces.” The decision to go with Getac devices was so widely embraced that some units were made available to the agriculture and nature protection offices as well.

All-weather GPS devices were also to be acquired, as part of a cooperative project with the department of water management, in order to gather data points in the field and combine the GPS data with other pieces of information like photos, text, as well as several predefined attributes. The selected GPS device would, therefore, need to be capable of fully integrating the uses of notepads, pencils, and maps in order to seamlessly digitize intelligence collected from the field and to convey it to decision makers without bits of information being lost.

Online connectivity, presently, is not very relevant as much of the area in Kärntner forest is extremely remote with no available reception.

After looking at all of the available options the Getac PS535F, a fully rugged handheld, was chosen because of its ruggedness, small a lightweight design, and unmatched versatility. From February to March 2011, the first units were rolled out and provided to several Kärntner rangers. A few months later, in the summer, a new version with extra features was made available as well, increasing the total to over 60 units in use. The devices were garnering enormous satisfaction ratings and extremely positive feedback – in the meantime even from other government agencies.

The rangers appreciate the PS535F’s extreme ruggedness (certified to MIL-STD-810G) and their reliability in all weather conditions; including variations in moisture, temperature, and elevation. Kärntner rangers particularly like the long battery life, the large, sunlight-readable display, and especially the light weight of the PS535F, as compared to competitors’ devices. Coupled with its portability, the feature of the PS535F loved most by the rangers is the large size of the buttons on the touch screen, enabling them to keep their gloves on while using the device. Benefits are also realized by administrators as these units fit perfectly into the IT- and software infrastructure of all the related departments. 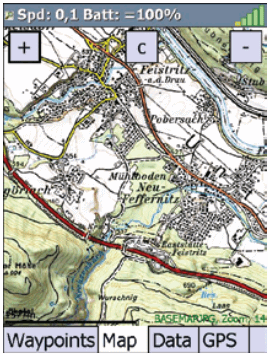 “Aerial images and land registry capabilities in your pocket”
With these Getac handheld devices the Kärntner State Forestry Agency teams now have all the data they need with them at all times. Land registry data, orthophotos, and numerous other data points for areas of Kärntner were gathered some time ago. Two thirds of this data has been laser scanned with the final third to be completed by 2013. The amount of data layers and thematic maps that can be viewed on the Getac devices could never be realized on paper. Additionally, because of the digitization of this information the need for printing it is eliminated – further aiding office staff in realizing greater efficiency levels.

Foresters can now see cadastral surveys, orthophotos, and forest development plans on their Getac devices wherever they are and make accurate GPS measurements, immediately, on areas to be cleared, etc. Previously this would have required two trips: One to gather the data, then a return trip to do the clearing, after having made measurements back at a desk. Furthermore, foresters who discover bark beetle nest stores can use the Getac’s GPS and photo capabilities to make immediate calculations as to damage potential and alert land owners to the presence of this dangerous pest. The immediate reporting of data that the PS535F provides effectively eliminates “media breaks” and ensures error-free and fast processing of events.

Independence, time savings and increased efficiency
“The use of Getac’s devices in the management of Kärntner forest has been ruled a complete success! We are experiencing substantial time savings in both administration as well as project completion because multiple trips to locations are minimized. The amount of tasks we can manage simultaneously would be nearly impossible without GPS. The devices allow rangers to take care of multiple projects on one trip where additional journeys would have been required previously”, says Zuba.

He concludes: “In Kärntner, mountain forests are often very hard to get to. However, these inaccessible areas often require special care, due to the frequent occurrence of pest-infestation of trees and increasing weather related incidents such as snow, avalanches, rockfalls and lightning storms. Therefore, we are especially pleased that we are now not only more independent from the office work, but have the extra time to devote to the preservation of our forests. And it is even extremely cost efficient!”

Getac customizes computers for the security team of the Baidu Internet of vehicles, to provide more efficient detection for vehicle information security