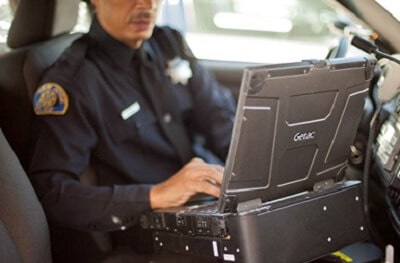 Getac fully rugged notebook B300 was successfully integrated in the new policing platform of San Jose Police Department during IT system transit, and efficiently reduce maintenance cost and equipment down-time, which helped officers to honor their duty on citizen protection with greater mobility and flexibility in extreme patrolling conditions.

Founded in 1849, San Jose has risen from a small, mostly-agricultural community to become the 10th largest city—in the United States. But as the city grew, so did the need to develop state-of-the-art policing techniques. As each new technology emerged—from the telephone in the 1890s and motorcycles and automobiles in the 1920s to mobile data terminals (MDTs) in the 1970s and laptop computers in the 1990s—the San Jose Police Department has quickly adopted new technology to better equip its officers to aid in the protection of its citizens.

In the 2000s, the San Jose Police Department continued to look toward new advancements in technology to aid in the ever-increasing responsibilities of its officers. The previous generation fixed-mounted mobile data computers (MDCs) were originally purchased and deployed in late 2003 into early 2004. This system provided a new technology platform that was primarily used for the deployment of the Intergraph Computer Aided Dispatch (CAD) system and positioned the San Jose Police Department for the planned Automated Field Reporting (AFR) project. This AFR project would allow for easier access by officers and investigative units to incident and arrest report information. Additionally, the ability to enter the information remotely by the patrol officer would help to decrease mis-keyed information by data entry personnel.

The previous system included a fixed monitor, a keyboard in the cab area of the vehicle, and a computer mounted in the trunk. The system was wirelessly connected to the police department using Motorola’s RDLAP wireless network that operated at one-quarter speed of older dial-up models. In 2006, the department deployed Sprint EV-DO commercial broadband wireless, which significantly increased wireless connectivity and enabled greater use of the MDCs.

The San Jose Police Department wanted to move to a modular platform and away from the fixed system because of health and safety concerns for the officers. “As the department approached the realization of being able to enter reports directly from the field without creating a paper trail, the issue of repetitive stress related medical issues, and officer safety were raised,” said Cecil Lawson, Program Manager, CIO, San Jose Police Department. “Creating reports in the driver’s seat of the patrol car for long periods of time was not acceptable. This also raised officer safety issues of being exposed and visible—and distractedfor long periods of time.”

As the warranties for the maintenance and service of the MDCs began to expire in 2006, the San Jose Police Department was required to maintain an inventory of computer components as they began to fail at an accelerated rate.

Additionally, because technology changed so rapidly, the existing system—both the hardware and operating systems—were several generations behind the currently commercially available technology and were unable to upgrade to newer application software versions and the newer operating systems.

“The cost of maintaining an aging fleet of mobile computer equipment continued to grow as the failure rate of computer components—disk drives, monitors, and keyboards—continued to increase,” said Lawson. “There was also an element of forced obsolescence relating to the evolving California Department of Justice (DOJ) security standards. The platform, including the hardware and operating system, could not meet some of the new or anticipated standards—specifically encryption of drives beyond 256 bits.”

A decision was made to replace the aging computer systems with new computers and a flexible platform that would allow for future growth of the system and the integration of technology that would allow officers to electronically submit reports from the field and make use of a Records Management System. 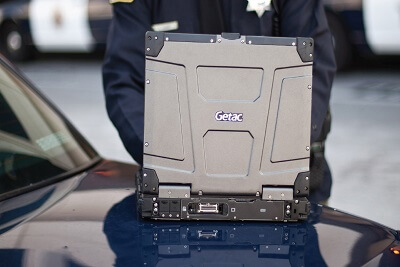 When looking for a new system, the San Jose Police Department wanted to “future proof” the new system as much as possible. With the planned purchase of a new field reporting and records management system a short time in the future, the system needed to be able to utilize mobile routing capability and use more than one mode of transport for wireless capability such as 3G WWAN, 4G, 700 MHz, or Wi-Fi.

The Getac form factor allowed for both fixed and detached modes giving the officer complete flexibility when writing reports and limiting the likelihood of injury and safety.

“The previous system was a fixed modular system that required police officers to write long reports from the driver’s seat of their patrol cards. This could potentially lead to officer safety issues or repetitive stress related injuries,” said Lawson. “Mobility was a requirement of the next system, but at the same time, mobility also brings a higher degree of damage to the computer. This limited our search to mobile computers that are rugged.”

Additionally, the San Jose Police Department wanted to ensure that all 1360 police officers using 420 cruiserswould have access to this new technology and it would withstand extreme conditions of police patrol driving. And while the city of San Jose doesn’t normally experience the extremes range in temperature found in other parts of the nation, the system would still be required to withstand a wide range of temperatures. Ambient temperatures inside the cab and trunk area of the vehicles can average 160 degrees in a parked car out in the sun and 120 in the trunk during the hottest days and occasionally drop below freezing on some of the coldest days. The department also required the use of the computer during inclement weather and tough enough to withstand rough handling.

After evaluation and bidding, the San Jose Police department decided to equip its 420 police cruisers with the Getac B300 fully rugged notebook with 80GB solid state hard drives. The Getac B300 is MIL-STD 810G and IP65 compliant and embraces several advanced security features to safeguard important data including a fingerprint scanner, TPM 1.2, and an optional smart card reader. Additionally, the Getac B300 features an ultra-bright 13.3-inch sunlight readable display. Each Getac B300 is connected to a Feeney Wireless CIRA mobile router that contains the Sprint EVDO modem and router enabling them to expand the system in the future as needed.

The San Jose Police Department is currently using Intergraph’s Computer Aided Dispatch (CAD) client software and the standard Microsoft office suite of software. There are also plans to add the Versaterm suite of Automated Field Reporting software in the near future.

For the San Jose Police Department, contemporary technology and mobility were key benefits. “With each generation of technology, the department spends time to solve any technology issues that occurred with the current technology. As computer technology gets older, most components with moving parts tend to fail. This includes disk drives, keyboards, and cooling fans. Our goal is to remove any moving parts if possible so we can avoid down-time that would result in loss of productivity, if possible,” said Lawson.

Choosing a solid state hard drive provided another way for the San Jose Police Department to lower the cost of repairs in the future. “The solid state drives are much smaller in capacity than rotating hard drives, however they are much larger in capacity than the actual footprint that we require,” said Lawson. “As with most technology, application vendors are relying on thin-client technology requiring less storage of information on the client and more reliance on information stores on the server. We use the disk drives to store the operating system, application software, maps and various small files only. This removes the need to provide additional space on client computers.”

The Getac five-year bumper-to-bumper warranty was, according to Lawson, was a “unique benefit” of purchasing the system. “This is unique in the industry and will save the department thousands of dollars over the life of the technology.”

CerbAir, The security revolution: Integrating Getac products in its solutions to field-proof its anti-drone system