“Our close partnership with Getac has meant that we have been able to combine our offerings to deliver an exceptional solution to the Østfold Ambulance Center.”

Ambulances in Norway usually only have one tablet-based PC and it is installed in the driver’s cabin, providing access to dispatch information and map linked to the hospital’s urgent care communications center. The communication center prioritizes the need to dispatch ambulances for incoming calls to the 113 emergency number.

The ambulance driver receives mission critical information about the call on the tablet and can also view the location for the incoming call on the map. In the back of the ambulance, where the patients are treated, patient records are still often managed with pen and paper, which was the case for the ambulances reporting to Østfold Hospital.

The Østfold hospital in Kalnes is a new and modern emergency hospital south of Oslo. The hospital, which was completed in 2015 and covers a population of 300,000 people, is part of the Norwegian Government’s strategic initiative to improve the Norwegian hospital system. From the beginning, the hospital has embraced innovation. For example, all patient rooms have windows with views of the surrounding landscape, and the hospital goes under the project name“Bright Views”. 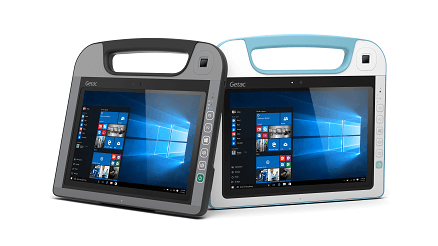 Innovative thinking with focus on improving patient safety resulted in the decision to go from a traditional pen and paper-based system to an electronic, tablet-based system for patient records, accessible from the back of the ambulance. The ambulance software runs on a Getac RX10 Windows 10 tablet and was developed in close cooperation between the Østfold Hospital and the Norwegian integrator Bliksund AS. The project, which also received support from Innovation Norway, led to the creation of a brand new electronic system for patient records in ambulances, as well as the Østfold Hospital requesting for the new system to support the hospital’s routines and requirement for simplicity and patient safety.

Today, all the hospital’s ambulances are equipped with a tablet, minikeyboard, docking station, and printer for use in the back of the ambulance. The RX10 rugged tablet from Getac is IEC 60601-1 certified for use in healthcare. It can be wiped down and sanitized and withstands drops and bumps as well as moisture. All the other equipment and mounting solutions also meet the healthcare requirements and have been built to withstand exposure to the outdoors and harsh working conditions. 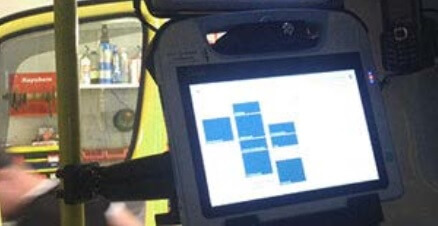 The benefits from using digital patients records and tablet-based solutions are huge. It significantly improves patient safety with real-time access to patient records. Patient records are updated in real-time, replacing handwritten notes that could be hard to read and were easily be damaged or lost.

The electronic patients records software is module-based, which makes it easier to add new functions and make changes accordingly.

The Østfold hospital with its 20 ambulances, and an additional 10 emergency ambulances, represents just a small fraction of Norway’s approximately 500-600 road, sea and air ambulances. Most of these ambulances still use a pen and paperbased system, so the Østfold hospital solution stands out as an example of how patient safety could be improved for many more people in Norway.

Østfold Hospital decided to purchase all the hardware, but Optidev also offers a subscription-based model with 24-hours exchange service. Optidev already supplies the subscriptionbased solution to many ambulances in Sweden.

CerbAir, The security revolution: Integrating Getac products in its solutions to field-proof its anti-drone system