Kongsberg Target Systems has been developing and manufacturing electronic solutions for over 25 years. Today, Kongsberg has over 12,000 electronic shooting targets operating worldwide for more than 1,100 different sports and hunting clubs as well as military, police and border guard units in close to 30 nations.

Traditionally, shooting range scoring has been paper based, which means shooters wait until all rounds are fired before manually finding out their scores. Kongsberg wanted to develop a system that could offer a new way to display information to the shooters in real time, no matter where they are. Such a solution could significantly improve efficiencies for a range of national shooting programmes, long and short distance shooting, and for everyone from professional shooters to military training. 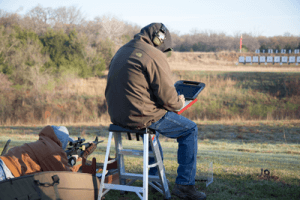 To develop and deliver such a solution, Kongsberg needed a mobile device to provide superior performance and connectivity and that could withstand a range of extreme environments such as freezing temperatures, snow, wind or humidity.

After assessing a number of competitive devices Kongsberg turned to Getac, which manufactures customised rugged solutions for defence, security, blue light, emergency services, utilities and field workers around the world. It selected Getac’s popular RX10 tablet because of its superior mobility and rigidity, which would allow shooters to easily handle and move the monitors according to their training needs and distances no matter where they are.

Kongsberg needed to be certain the RX10 would stand the test of the job and deliver the performance needed to ensure results could be displayed real time, so it carried out its own extensive testing and benchmarking. Importantly, wireless connectivity capabilities needed to be effective in a range of scenarios including over large distances without interruption such as in open fields or forest environment. In the field devices would be hooked up to wifi antennas to allow communication between the firing line and target line, which allow signals to be sent rapidly between device and target. The tests with the Getac RX10 versus other competitive devices demonstrated the RX10 could reliably deliver data rapidly over long and short distances.

Other key functionality which impressed Kongsberg included the RX10’s IP65 rating. This means the tablets are protected from water and dust ingress, drops of up to four feet and have an operating temperature of -21°C to 55°C. The new system would have to handle extremely high temperatures and bright sunlight, for example in Australia, India and USA, as well as tough outdoor environments such as in Norway where there is much colder, wetter weather. Getac’s proprietary Lumibond display technology means the touchscreen can be operated by finger, glove, stylus and can even operate in rain, which is essential for shooters practicing in a range of environments and protective gloves or clothing. Hot swappable batteries give shooters the ability to continue operating during a practice; often with between five and 150 people shooting at any one time, it’s essential that all the kit keeps on running.

Getac’s customer service was also an advantage for Kongsberg, as it needed a partner that it could work closely with to ensure the device could be customised to meet all of its needs. Along with customising the device, Getac is also helping Kongsberg to integrate the necessary software and connectors to deliver a robust and compelling new proposition. 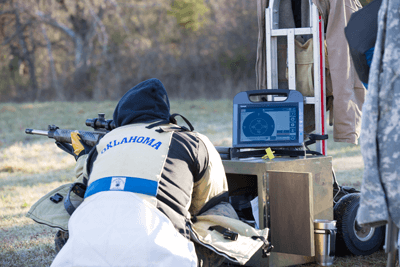 With the new mobile electronic range system based on the Getac RX10, Kongsberg will now be able to offer its global customers a brand new – and much more efficient – way to score their shooting. Each shooter will be able to have a monitor next to them at all times that instantly displays where each shot hit the target. By delivering immediate feedback shooters can more quickly understand how to improve and can move from one target to another more rapidly, without interruption. Some early testing with customers have suggested that users can learn to shoot over twice as fast as with traditional paper scoring methods. The new device has also opened up new opportunities for users, including facilitating online competition between shooters remotely.